Since he was a teenager, John has always known he was good at cutting hair. He got his start helping his brother trim hair at a salon in Malawi when he was very young. Now, 17 years later, John is achieving his dream of opening his own full-service salon here in America. Called He & She Salon, John’s shop is located on Glenwood Avenue not far from the Boise Hawk’s baseball stadium.
John’s salon isn’t just any old regular salon, either. It’s got a pool table, provides customers with free soft drinks and WiFi, and features a flat-screen TV, flashing lights and energetic music. “We have a fun environment here,” says John. “You can get your hair cut and hang out while watching a big game.” John’s salon offers memberships too. For $180, kids nine and under can get their hair cut anytime for six months. For $240, anyone from age ten to 65 can get their hair cut anytime during a six-month period. For $150, seniors older than 65 can get a haircut anytime for six months.

A new life in Idaho

Born in Burundi, John arrived in Boise in 2016. He joined his wife who had already been in Idaho for seven years. Together they have two sons, a two-year-old toddler and a baby who is not yet a year old. “We like Boise,” he says. “It’s a nice, safe, quiet town and people have been very kind to us.”
Growing up, his family had to leave Burundi because of war, and they spent many years in Tanzania before moving to Malawi. When he came to Idaho, the Agency for New Americans told him about EO and helped give him a vision about how to start his own salon here in the Gem State. He said Richard at EO was particularly helpful in helping him get started.
John actually knew a few of his current clients back in Malawi and Tanzania. “When I first arrived, I saw about six people whose hair I used to cut back in Africa he says. “They asked me if I would cut their hair here, too. And that’s when I got the idea that I should open a salon here in Boise.”

Using the salon to make a living

No stranger to hard work, John spent his first year in Boise working two jobs to earn money for a house, which he was able to buy at the end of the first year. His second year he went to barber school to get accredited to be a barber here in Idaho. And now in his third year in Boise, he is opening the salon.
John says he is grateful to have the salon and will use it to support his family and someday help his kids get an education at a university. “I’d also like to open another salon in Meridian,” he says. “And someday even open up a salon out of state. I would love to open my own barber school as well.” 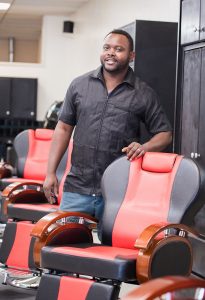 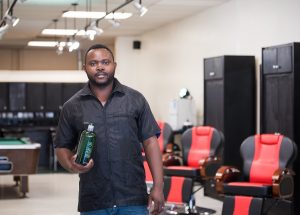