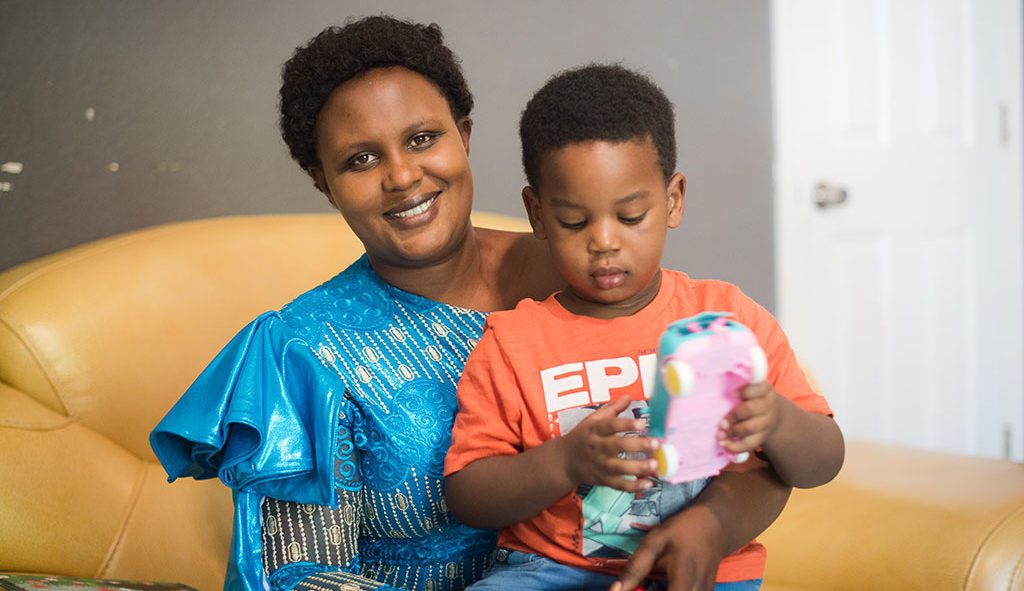 We can’t say enough nice things about Beatrice. She has a smile that can captivate a room. She’s kind and smart and dedicated to her family. She’s beautiful inside and out, and Boise is lucky to have her.

When Beatrice arrived in the Treasure Valley in 2011, she had three kids—an 8-year-old son, a 4-year-old son, and a 6-month-old baby girl. Today she has four kids. “I give thanks to God that I’m here in Boise and my family is safe,” she says. “God has kept me alive and brought me here for a reason. He has a purpose for me.”

Help from EO to start her business

Despite all she’s been through, Beatrice has a positive outlook on life. And she was more than ready to get a fresh start in Idaho. In 2014, Beatrice started her childcare business. EO helped her with training and to get toys and supplies for her childcare.

Beatrice says covid has made it harder to own a childcare business. “Parents are more worried for their kids now,” she says. “I only watched two children during the pandemic. I was not making enough money to take care of my own children. Mine was just another business that struggled during 2020.”

Growing up in Congo, Beatrice had six siblings. Today they are spread out, she says, and live in places like Denmark, and Kentucky and two of them even live near Beatrice in Boise. Both her parents have passed away. She was 6 when her father died. Eventually, she had to leave school to help her mother. Beatrice only got through four grades before leaving to help with chores and the other kids.

Beatrice says her early memories of her mother give her strength. “In the morning my mom and I would sing and pray together,” she says. “It’s a memory I keep with me that has helped me through difficult times. My mother experienced many hardships in her life. My father died when I was young, and she raised seven kids on her own. When things get hard for me with my three children, I often think ‘How can I be tired? I only have four kids.’ And I keep going.”

A dramatic departure from Congo to Rwanda

Beatrice was 7 when her family left Congo to go to Rwanda in 1996. It was no longer safe for them in their home country. She, her mother, and her siblings (six kids at the time) escaped with other mothers and children on a truck late in the evening.

“I remember seeing 10 and 12-year-olds walking toward safety by themselves,” she says. “We went without food or water for three days while trying to escape. Someone even tried to kill my mother with a machete, but she ran away.”

During their escape, Beatrice says at times they had to sleep in one room with many people. Other times hundreds of people were sleeping outside, and some were dying. They had to hide in the jungle, which Beatrice says was very scary.

Difficulties during the genocide

Beatrice lived in the refugee camp in Rwanda for 16 years. While she was there, she saw firsthand the Rwandan genocide. “Neighbors were killing neighbors,” she says. “My aunt, uncle, and cousin were killed because they were Tutsi. I couldn’t comprehend why neighbors would kill each other because of the way God made them—because of their appearance. It felt like darkness had settled across the land.”

Waiting for her husband

Today, Beatrice is waiting for her husband to come from Rwanda, where he’s still living in the refugee camp. It was there they met. His paperwork has stalled, and they’ve been waiting for years. Unfortunately, COVID has only slowed the process even more. Her aunt and cousin are also in the camp.

Looking toward the future

When asked about her plans for the future, Beatrice says her goals include getting her GED and improving her English. When her husband comes, she wants to buy a big house and start a larger childcare business. We’re so glad you’re in Boise, Beatrice. Your story, strength, and kind spirit inspire us.

Update on Beatrice and Her Family

At the time of this posting, Beatrice has finally welcomed her husband to Boise, after being without him for over ten years. As she approaches the seventh anniversary of her business, Beatrice is thankful that she is able to support her household while her husband adjusts to his new home and reconnects with his family.